We are Christians when it suits us

A young Kenyan man stood up and addressed the room, almost all of whom were his elders. “We are Christian husbands only when it suits us.” He paused for effect, then continued, “But when it does not suit us, we point to our culture and become cultural husbands.” It was a strong rebuke coming from one of the youngest men in the room.

That was one of several points that defined my recent visit to Kenya. Allow me to explain…

I had the privilege of accompanying a team of four couples from North Point Community Church to Kenya. The trip was created and designed specifically to focus on marriage. We visited two rural communities with different tribal cultures. As always, our time in rural Kenya is filled with the stark reality of what it means to struggle with extreme poverty. It’s also filled with a greater measure of hope, change, and progress.

The purpose of 410’s marriage trips, like everything we do, is to impact the worldview of the community and the US team. The win is to take a step toward shifting worldview—from whatever it is today—to a stronger Christian biblical worldview. We believe that stronger communities have stronger marriages, stronger families, and stronger churches. This particular trip focused on marriage.

Our time started in a predominately Maasai community called Mutirithia, located in north central Kenya. 410 Bridge has been working in Mutirithia for a relatively short time. It’s a herding community that has been devastated by a two-year drought. Most families we met have lost 50-75% of their herds due to the drought. Men and boys left the area, in some cases travelling over 100kms to find water and grazing lands for their cows, goats, and sheep. About two weeks before our arrival, the rains began, and the people and the herds were beginning to return.

After a Spirit-filled church service, the North Point team met with several couples from multiple churches to discuss marriage. The team created an interactive exercise where the couples crafted a small purse made only of strips of masking tape. The tricky part is that they can only use one hand each. It was fun, a little silly, but created a great object lesson for separate discussions with the men and the women.

What the team heard separately from the men and the women was unsettling to say the least. In Maasai culture, the patriarchal hierarchy of the household starts with the men, then the animals, then the children, and finally the women. 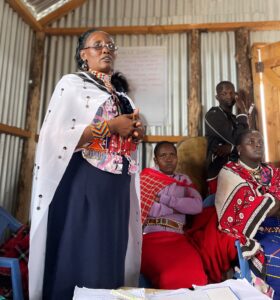 The women heard that it is not uncommon for husbands to return home from grazing their herds—angry because of the drought and harsh conditions—and beat their wives. It is culturally acceptable. The Maasai wives asked for advice from the American wives on how to handle such situations while the Maasai men pointed to their culture to justify their behavior. The team did a good job of pointing to scripture for the truth of how God created marriage and the Biblical roles of husbands and wives. It was challenging conversation, but the truth was shared. Moving from cultural norms to biblical truth is a long and challenging road.

From Mutirithia, we traveled four hours south to Ndibai (“dih-by”)—a community where 410 Bridge has been working for several years. The predominant tribe in the area is Kikuyu.

Our day started early with the preparing of food for a community cookout. About 25 couples from different churches convened for a day focused on marriage. The men slaughtered a sheep while the women prepared rice, vegetables, and chapati. While the food was cooking, the North Point team facilitated another interactive activity where the wives had to lead their blindfolded husbands through an obstacle course without touching an obstacle.

The room was filled with laughter and excitement as the women had the rare opportunity to lead their husbands. The enthusiasm and joy were striking. Kenyan men and women were belly-laughing, embracing when they completed the course, and in one case a couple held hands for a few minutes after successfully completing the course. The simple act of a husband and wife holding hands in public for an extended period is extremely rare. 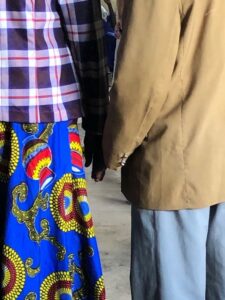 As normal in these types of environments, the men and women discussed the activity separately. We’ve found that women are more inclined to speak openly with just the women, and the same holds true for the men. I was observing the husband’s discussion.

This is when the young Kenyan man stood and addressed his elders. He said, “All of us here know that we are proud Kenyan men. And we claim to be Christian. We also know to be true, that we are only Christian husbands when it suits us. When it does not suit us, we point to our culture and become cultural husbands.” The room filled with an affirming chatter. 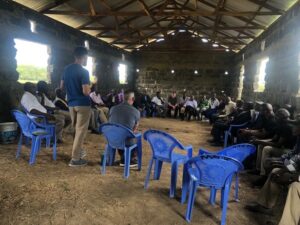 He turned to the American men, “You may not know this, but we all know something else to be true. When many of the men in this room awaken in the morning, they will throw off their blankets, get out of bed and never once address their wife with something as simple as ‘good morning.’” More chatter, affirming nods, and embarrassed laughter filled the room. He returned to the Kenyans… “When is the last time any of us in this room told our wives that we love them?”

The room fell quiet. It was a convicting time for husbands whose culture frowns on open displays of affection or saying the words “I love you.” It is seen as weakness.

The remainder of the hour-long conversation was healthy, productive, and God-honoring. The entire group—Kenyans and Americans—spoke of how our respective cultures impact God’s design for a healthy marriage. The same conversation was being had separately by the women. We spoke of Ephesians 5 and Romans 12:2. By the time the day was over, we had all taken one step, albeit small, in the direction of a stronger biblical Christian worldview on marriage.

When both the husbands and wives rejoined for the meal, it was evident that some marriages in Ndibai were a little stronger than they were the previous day.

We are grateful for the commitment of time and resources of the North Point team. Like all the teams that visit 410 communities, they are a catalyst to engage the community for positive change. Change that is rooted in God-honoring relationship and worldview shift. We look forward to more marriage-focused teams visiting our friends in 410 Bridge communities.